Hearing the essence of Vedic knowledge

Vanimedia is the repository for media files, and works across all the Vani petals. Images, audio and video of Srila Prabhupada are collected here, as well as image files used for all the Vanipedia petals. Audio and video are also being compiled by subject for usage in Vaniquotes.

Who is Śrīla Prabhupāda?

A. C. Bhaktivedanta Swami Prabhupāda is a self-realized, pure devotee of Lord Kṛṣṇa. While physically present among us he shared the essence of Vedic knowledge liberally and without prejudice. His only desire was to fulfill his spiritual master's desire – to introduce the process of Kṛṣṇa consciousness to the world.

Śrīla Prabhupāda showed us the importance of living life according to the directions given in scripture. He spoke and wrote profusely so that many may have this guidance in life, and he wished that every person on the planet had the opportunity to read his books now and in the future.

Collaborate with us to create multi-language subtitles for 1,080 - 1 to 15 minute audio clips translated into your language by Srila Prabhupada's 50th Anniversary of arriving in the West on the 4th of October 2015. 359+ devotees are active in 84+ languages. Each language has its own YouTube playlist for easy access, 18,100+ subtitles can be viewed here.

View all our multi-language videos here at Vanimedia 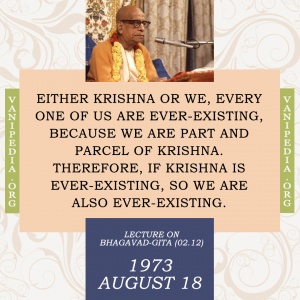 Image Quote from Srila Prabhupada
In this Kali-yuga Krishna has Come
in the Form of His Name, Hare Krishna - 0256
06:40 minutes from a lecture on BG 02.08 in London 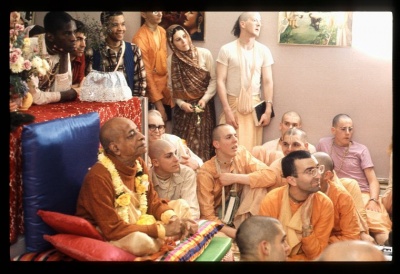